With $170 Billion, the GCC can Triple the Size of Asset Management and Establish GCC Infrastructure Bank -The Power of Thinking Big for Pension Funds

In recent years, new-generation economists and management gurus have increasingly been speaking about the significance of ‘mindset’ and ‘culture’ to thrive in a complex world. They clearly differentiate between two fundamental styles of organizational behavior to face challenges; between ‘active inertia’ (exerting more efforts within the same old and proven practice) and ‘a game-changer mindset’ that brings a whole-new level of thinking to build a fresh competitive formula. For them, if you are a policymaker trying to make a real twist in your country’s macroeconomics, it matters most substantially whether you are consuming your energy fine-tuning fiscal policies and parameters in Orthodoxical ways, or you are building a new economy altogether.

And if you are a company CEO seeking to position your firm for competitive growth in the coming 10 years, it matters massively whether you are consuming your energy in boosting your production capacity and building a new plant, or you are rethinking and recasting your business model and ways in which it is executed differently! In essence, that is to say there is a strategic premium or difference between trying to accelerate and do more of the same activities within the same ‘operating frame’ that succeeded in the past, and trying to ‘regenerate’ a new mental model or mindset that gives you a whole-new distinctive power and sets you apart from the crowd. The Hilton hotel vs. AirBnB couldn’t have been more powerful to confirm this theory. It took the Hilton Corporation 100 years to deliver 700,000 rooms. AirBnb (an online hospitality service) took 6 years to deliver 1 million rooms, even thought the latter has never owned a property, let alone built one.

Hence, time after time and case after case proved that the size of accomplishment, the size of fortune, and the size of one’s glory is dependent on the size of one’s thinking, more than any other intrinsic strengths. There is magic in thinking big, and in the words of Disraeli (the philosopher): ‘Life is too short to be little."

Similarly, if we apply the same notion on the asset management industry in the Middle East, it took the region’s top 20 asset managers (the renowned investment banks and asset management firms managing around 95% of the region’s investment assets) nearly 30 years to collectively build a US$90 billion AUM. Saudi Arabia and the United Arab Emirates each have five institutions in the ranking, followed by Kuwait and Bahrain with three each; Egypt and Qatar with two each, and Oman with one. If they enthusiastically continue tweaking and innovating their products and service offerings, they could potentially grow that number to US$100 billion in five years. However, should the industry go a little bit beyond the normal schema and embrace a game-changer midset (supporting political lobbying in this direction), they can, within the same period, raise that to a prize of US$ 260 billion AUM, a figure that not only gives a whole-new depth to the region’s capital market, but also creates a paradigm shift in the central role played by the financial sector as a growth engine.

How? If you want the answer, then you need look no further than the pension industry. However, before delving into the proposition, let us lay out some pure facts and figures of how things look like at present in order to frame how we get to our point briefly:

To give one example substantiating the above figures, let us take the case of UAE where there are annual labour and financial reports issued by the Federal Competitiveness & Statistics Authority “FCSA” and use that a benchmark for the rest of the GCC countries. The total annual UAE payroll in 2016 reached US$120 billion, 65% up from the year 2010, with a CAGR of 8%. The expats with an annual income of US$16,000 or more have earned a total of US$41 billion in total compensation, of which US$23 billion were for basic salaries. Backtracking to year 2000, the value of cumulative EOS liabilities in UAE is estimated today at US$ 36 billion. 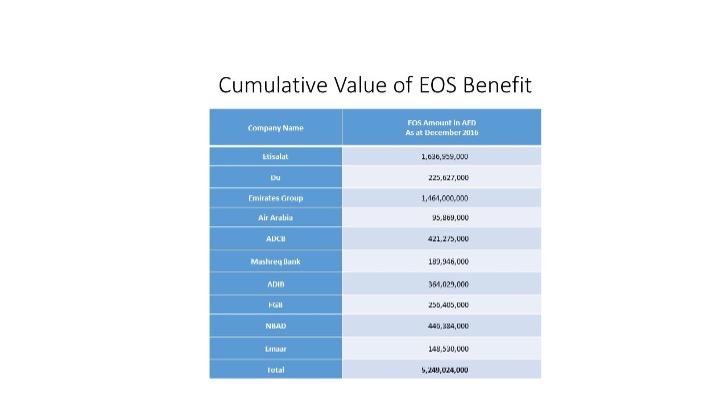 The above are just a small, random selection from large enterprises in a single country that also has 40 oil and gas companies, 50 banks, 22 airports and 17 airlines operating for various purposes. If you apply the UAE data and extrapolate it to Saudi Arabia and the rest of Gulf countries (where a number of both overstated and conservative figures have been produced in the last 10 years), you will reach an estimated US$ 110 billion in end-of-service benefits sitting on the balance sheets of about 4,000 large and medium-sized companies.

Now, if we apply a ‘game-changer mindset’ to this area of End-of-Service Benefit by taking two steps: First, introduce a mandatory funding of all these liabilities over the next 5 or 6 years; and Second, a 6% (the global average of an individual employee’s pension savings rate) of Expats’ payroll is directed towards new locally domiciled and institutionally managed pension/benefits funds; that would mean injecting fresh assets of US$170 billion into the GCC’s asset management industry in the next 5 years. In theory in the case of UAE, we have approx. US$2 billion worth of EOS liabilities accrued by employers and approx. US$2.4 billion in employee contributions annually. And by applying that to the whole GCC, you have US$6.5 billion of EOS liabilities and and approx, US$6 billion in annual employee contribution. Let us also not forget a gradual redeployment of an estimated US$110 billion already sitting on employers’ balance sheets. Such a policy move will not only allow us to triple the size of the MENA region’s asset management overnight, but it will also reduce capital outflows by expats, boost GCC equity markets with fresh payroll cash and provide liquidity to asset classes and instruments such as fixed income, REITS and ETFs.

Again the Power of Thinking Big

Let us suppose that GCC governments make these policy changes and we have established in 5 years an asset management industry that’s three times bigger than the present one. What opportunities, which local markets and which investment vehicles can absorb this huge new money? After all, you don’t create an asset management industry just for the sake of creating one; you usually better do that to attain other and larger objectives. Well, we all know the liquidity issues the GCC governments have been facing since the new normal of oil price of 2014, because of which national debts have been piling and some GCC countries spend up to 60% of their oil revenues just to cover the cost of employee wages.

How about a project or an initiative that saves both the GCC pensions and infrastructure at the same time? How about a plan to sell US$50 or US$100 billion of 30 or 40-year bonds only to, or at least privileging first, the pension and benefit funds? In other words, this is a proposal to set up a GCC Infrastructure Bank which extends loans to fund major construction and maintenance projects, in partnership with local governments. It could follow a similar model as the World Bank’s International Bank for Reconstruction and Development, which issues top-rated bonds and in turn gives loans and guarantees to low- and middle-income countries.

The beauty of thinking big this way does not only end up with yielding bigger unprecedented accomplishments, but it also generates new fascinating ways of solving chronic economic woes that have for long seemed to be insolvable. So, let us draw a quick inventory of how minor fiscal policy changes on a small matter like the End-of-Service Benefit can find the key to major economic issues for the GCC:

1.      You have addressed the critical issue of pensions for a major demographic (60%) of GCC’s workforce, bringing stability and attractiveness to local labour markets.

2.      You have tripled the size of your asset management industry overnight (from US$90 billion to US$260 billion).

3.      You have given vast depth and liquidity to your capital markets where trading volumes have been suffering since 2008, slowing market classification.

4.      You have created the much-needed liquidity and financing sources for local governments whose budgets are under tremendous pressure due to a declining oil revenue.

5.      You have tackled the issue of financing infrastructure construction and maintenance in a region that’s still in the phase of building its infrastructure and developing its non-oil economy.

6.      You have found relatively safe and guaranteed investment vehicles for pension savers and pension funds who would otherwise be reluctant to save or invest locally.

7.      You have established stronger local funds and asset management industry that can attract a bigger allocation from foreign Institutional investors to GCC capital markets.